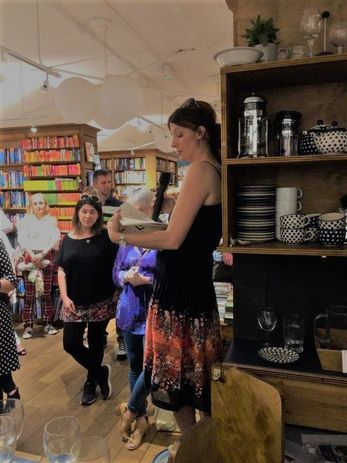 ‘Anne Corlett is a writer with huge potential, and I’m looking forward to her future works’
Claire North

Anne Corlett has taken the themes of apocalypse, people attempting to create Utopia but unleashing Armageddon, population engineering and breeding programs, and put her particular stamp on the familiar. The Space Between the Stars is a sci-fi story laced with homey details like e-readers and jigsaw puzzles--there are no esoteric descriptions of warp drives or biodomes or aliens. But there is adventure, there is romance, there is self-discovery
Shelf Awareness

“With its unique plot and luminous prose, it’s hard to believe that The Space Between the Stars is a debut novel. Anne Corlett understands the complexities and frailties of the human heart and captures it brilliantly on the page. Don’t let the setting fool you—this is a story for any age, combining love, loss, grief, hope, and possibilities all in one delicious book. Definitely one for my keeper shelf.”
Karen White, New York Times bestselling author of The Night the Lights Went Out

“[A] fast-moving and gripping ‘end of the worlds’ tale focused on the efforts of flawed survivors to ensure the end is not the end of humanity.”—Jack Campbell, New York Times bestselling author of Vanguard

An impressively strong debut . . . rewards the reader with real characters, strong emotional beats, and a fantastic journey across the stars
The Book Bag

Seeking self-knowledge at the end of the world: a statistically unlikely number of survivors try to get back to Earth to seek salvation in Northumberland. Some hope for a lover; some wish to glorify God; some just want to be left alone, really. The result is my favourite book of the year so far. My heart beats faster just thinking about it.
Top Ten Tuesday blog (US) Best of the Year So Far piece

In this breathtakingly vivid and emotionally gripping debut novel, one woman must confront the emptiness in the universe, and in her own heart, in spite of the terror of isolation.
Ten Debut Novels that won’t disappoint – Signature (US)

The Space Between the Stars is an interesting look at defining self and finding meaning when you’re only one of a few humans left alive. Jamie goes through a lot of character development as she examines what it is she really wants, and who she really wants to be. The apocalyptic virus also forces what humanity is left to show its true face.
Relatable, compelling characters and an interesting storyline.
Popculturebeast (US)

Everyone in The Space Between the Stars is a misanthropic weirdo in one way or another. Once on the ship, Jamie and her motley crew run a picaresque through the known planets, picking up cast-offs and misfits, the kind of people who can survive a plague that demands you live out your illness (and your life) alone. After some maneuvering, they land on the Northumberland coast of Jamie’s childhood. Here is where she rock-picked for the tumbled seaglass of her youth; here is where she tried (and tries) to put all the pieces together.

The metaphor of seaglass—broken pieces tumbled to a scratched-surface smoothness—runs through the entirety of this aching, lonely novel. This is messy, personal stuff, flashing just there on the rocky beach, visible when the light catches it just right. If your predilections run to the more science fictional—if you prefer the scientifically plausible over the emotionally relevant—this isn’t the book for you. Anne Corlett isn’t detailing a biological plague, but a personal one, tumbled on the rocks of personal history. It was lovely to walk this last beach, at the end.
Barnes and Noble Sci-Fi and Fantasy Blog

The first chapter of this book was probably one of the best first chapters I’ve ever read and hooked me so completely.
The Bionic Bookworm (US)

The Space Between The Stars is – for me, at least – this year’s Station Eleven… it spoke straight to my heart and unstrung it, leaving me crying quietly on an aeroplane… Like Station Eleven, this is a story that uses a SF conceit to explore human nature rather than a story that is interested in its SF trappings. As such, some SF readers may feel sold short. But not this SF reader. This reader is in resonant bits.
The Speculative Herald (UK)

The Space Between the Stars is, ultimately, a kind novel. Strikingly written, with very human characters and a deep concern with human frailty, it is an excellent debut. I recommend it, and I look forward to seeing what Corlett does next.
Tor.com (US)

If you liked The Girl With All The Gifts or Station Eleven, even Bird Box or I Am Legend then you will adore The Space Between The Stars. I cannot wait to see what Anne Corlett writes next!
Estellosaurus.com blog (UK)

This is one I shall be thinking about for a while, I suspect. If you enjoy unusual books that raise hard, pertinent questions about why we are here and what we are doing, then track this one down.
SFreader.com (US)

The Space Between the Stars was just a really good book and so difficult to put down! Anne Corlett has successfully written a book about the destruction of society that wasn’t bleak and awful, but rather focused on personal reconciliation and new beginnings. This is a book that will definitely be placed on my shelf of keepers…
Powder and Page blog

This is a story about the gaps in people – their emotional voids, the people missing from their lives and, in some cases, the gaping holes where their moral compass should be… fans of Becky Chambers, Connie Willis’s Doomsday Book or P.D. James’ Children of Men perhaps – will relish it. Science-fiction isn’t all about rockets and ray guns – psychology is a science too, after all…
Jane and Bex Book Blog

The book is beautifully written…the characters both mesh and conflict well. Jamie encounters a former preacher, a prostitute, and of course, no space journey would be complete without a rugged pilot and his rather questionable crew. Corlett picturesquely captures the isolation, fear and confusion the situation causes.
SFF World

The Space Between the Stars is a story about intimacy and loss, grief and community. It's a story about figuring out if life has meaning when the world as we know it has ended, with an earnest exploration of how we do — and, perhaps more often, don't — deal with trauma. The literary-skewing science fiction novel is one of the most cathartic books I've read in a while, a salve for anyone who has read or watched a "gritty" post-apocalyptic story and wondered why the story isn't telling us how anyone feels about the end of the world. It makes me wonder why all end-of-the-world stories aren't explicitly about collective and personal trauma because, the way British debut author Anne Corlett writes it, how could they ever be about anything else?

In many ways, the set-up of The Space Between the Stars reminds me of Firefly. It tells the story of a ragtag band of survivors looking for purpose in a world that has gone to hell. Like Joss Whedon's beloved TV show, the group of colonists even includes a former priest, a sex worker, a young person who sees the world a bit differently than everyone else, and a no-nonsense ship captain with a heart of gold.

Unlike Firefly, however, The Space Between the Stars tells its story from a specific female character's point-of-view. Jamie is our protagonist, a 40-year-old veterinarian who tried to escape her own grief over a miscarriage and the unresolved trauma of her mother's death by moving to the fringes of the galaxy. We begin her story with a hell of a hook: Jamie waking up from the viral fever to discover she has somehow survived when the vast majority of the human race has not. It's the beginning of The Walking Deador your favorite video game. And what follows more than delivers on the narratively-rich set-up...

The Space Between the Stars follows Jamie as she makes her way across a galaxy trying to determine what survival will look like for her and for the human race. Most post-apocalyptic these days tend to try to force their narrative tidily into a "utopian" or (more often) "dystopian" box. The Space Between the Stars is refreshingly nuanced in its treatment of the end of the world as we know it. There are things that are horrific about the new world order — if it can even be called an "order" in the direct aftermath of the traumatic pandemic — but these horrific things are vestiges of the old world. It's unclear, at this point, if the system of "haves" and "have-nots" will stick or rather give way for something new... something better.

There are still good things to be experienced at the end of the world: joy and connection and healing. Jamie never loses her intense sadness, shock, and anger over the extreme loss of life, but she is also still mourning the very personal tragedies that upended her life before the apocalypse. It takes the end of the world for her to deal with them in any honest way, and for her to begin to embrace concepts like community and family again.
.
Women are socialized to be nurturers and caregivers and are often represented in stories as unending founts of affection, understanding, and empathy. As a woman, this has not been my experience and to see a female character depicted as confused and frustrated by her own inability to be close to others (in part because of the multiple traumas she has experienced) and others' inability to understand that was cathartic.
Jamie literally goes to the edges of humanity because she can't get the space she needs when she is surrounded by other humans. She is unable to put up the boundaries she needs and, therefore, unable to properly deal with her trauma. Because of this, Jamie's empathy often fails her, especially in relation to Rena, a supporting character who has been irreversibly changed by her own traumas. This may make Jamie unlikable at parts, but it also makes her thoroughly human.
If you're looking for hard sci-fi, this is not it. The futuristic space setting is more of a backdrop than the point, but Corlett calls on some familiar genre tropes to tell her story about isolation vs. connection at the end of the world. If you're into the space adventure genre, you'll feel at home here.
Ultimately, The Space Between the Stars gives a pretty satisfying and hopeful answer to the question: What meaning does life have in the wake of an apocalyptic event? The same it had before the apocalyptic event: whatever meaning you are able to bring to it. Family. Community. Connection. These are things worth striving for, whether the world is ending or not.

There are also a variety of reviews on Amazon UK, Amazon US and Good Reads