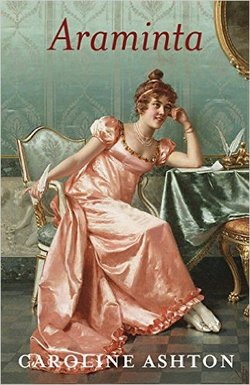 Araminta Neave has neither aristocratic birth nor breeding. She does, however, have a father who is indecently rich from his trade with the East. That, combined with fiery curls and a temperament to match, makes her someone to reckon with.

Her father wants the very best for his girl. That, he thinks, would be marriage to a Lord. But their brief visit to the autocratic Lady Tiverton’s home showed him how unlikely that is. Araminta is too unconventional. Undaunted, he has a plan.

Enter the gently born but impoverished spinster Wilhelmina Orksville, instructress, mentor and the bane of Araminta’s life. She schools her manners, replaces her dresses and makes her embroider handkerchiefs. Only Araminta’s love for her father stops her rebelling.

Her only escape is riding her magnificent stallion in Rotten Row where she attracts much attention. Particularly from Lord Frederick Danver, the Duke of Ellonby’s younger son, and Lucius Renford, the louche Viscount Trelowen.

Both want something from Araminta. Lord Frederick covets the horse for his mare; Trelowen, a wealthy but unloved wife. What lengths will they go to in pursuit of their goals, and will either win Araminta? Araminta is the second in Caroline Ashton's Regency Belles series and is available in paperback and ebook here:  amzn.to/28YPlz7