In 1997 at the age of 80, Leila Berg published Flickerbook - a memoir of her first 22 years.  Unusually, the book was a 'reliving' rather than a remembering.  In a series of extraordinary vignettes, Leila re-experienced her early childhood and adolescence in Salford's Jewish community.

Highly intelligent and well-read, Leila recounts her burgeoning sexuality and political awareness.  She began to associate with members of the Young Communist League, which she eventually joined,  selling copies of Esmond Romilly's Out of Bounds.  She was still grieving for the death of two of lovers during the Spanish Civil War when the Second World War broke out.

Flickerbook was first published by Granta Books and was unaminmously voted as Book of the Month by Waterstones booksellers.  In 2021 it is being reissued by CB Editions with a new foreword by Ruth Fainlight and an afterword by Dame Hilary Mantel.

​It is also available as an ebook from Amazon, published by The Paris Press 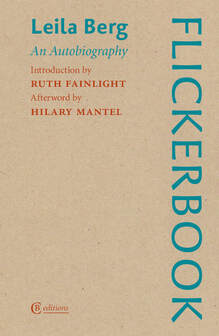 '... a winning, frank and highly readable memoir which shows how successfully one may apply techniques of fiction to one's own life... This is what Leila Berg has captured; not static images of childhood, but something of its process'

‘An evocative picture of a time and a society, shot through with brilliant vignettes.’

‘A wonderfully vivid depiction of the radicalism of the 1930s and, beyond that, an exceptionally artful and honest portrait of adolescent rites of passage.’

‘It works in difficult places, this book . . . Berg is a fine, evocative writer, with a great ear and eye.’

‘This extraordinary memoir… is a series of evocative images which tentatively re-create the emotions of a young girl. As a distinguished children’s author, Berg is uniquely qualified to attempt this ambitious reconstruction…it works magnificently well…the honesty and poetic insight of this superb autobiography.’

‘She marvellously portrays the frazzling bewilderment that nearly all children suffer, remembers exactly how it felt to be locked into profound and terrifying ignorance.’