Vanity Fair - A Novel Without a Hero

I was slightly apprehensive when I heard that ITV were dramatising one of my favourite novels. Tread softly, I thought, for you might tread on my dreams, in boots as big as Major Dobbin’s
size thirteens…
But so far, so very good indeed.

Vanity Fair is brilliantly done, despite Olivia Cooke not resembling the Becky Sharp of mine or Thackeray’s imagination;
he describes her as fair haired, green-eyed and feline. Yet Ms. Cooke’s bold, dark, gypsyish beauty does suit Becky’s
unrepentant and adventurous spirit. And I’m also enjoying the irreverent use of music by Bob Dylan, INXS and Madonna.

Social climber Becky was above all a ‘Material Girl’.
Here she is on the eve of the battle of Quatre Bras, cold-bloodedly working out her financial position should her husband Rawdon be killed:
Every calculation made of these valuables Mrs. Rebecca found, not without a pungent feeling of triumph and
self-satisfaction, that should circumstances occur, she might reckon on six or seven hundred pounds at the very least
, to begin the world with; and she passed the morning disposing, ordering, looking out, and locking up her properties i
n the most agreeable manner…If this is a novel without a hero, at least let us lay claim to a heroine. No man in the
British army which has marched away, not the great Duke himself, could be more cool or collected in the presence
of doubts and difficulties, than the indomitable little aide-de-camp’s wife.
Cool and collected…yet beady-eyed. Whilst seeming to express affection for his heroine, Thackeray is also letting the
reader know that Becky is essentially amoral.
That scene takes place the morning after the most famous ball in history, given by the Duchess of Richmond
on June 15th, 1815.

Most of the main characters in Vanity Fair are sent there by its author, and as I wrote in my monograph
Beauty and Chivalry.
“Thackeray’s divinely monstrous social climber Becky Sharp reaches the apotheosis of her career during the Ball,
dazzling George Osborne and snubbing his shrinking wife Amelia”
The fatal timing of the party, during which it was announced that Napoleon had invaded Belgium, lit a spark in the
imaginations of many other poets and novelists. Officers in dancing shoes and satin knee-breeches rode off to fight
, leaving their  partners to pray for their safety, as Amelia Osborne does, and Becky Sharp – er – doesn’t. 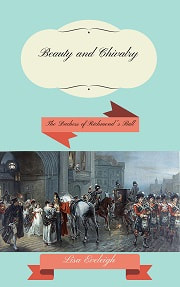 ​Yet good though Thackeray’s fictional recreation of the Ball is, only Lord Byron’s hectic imagination really brought it to life,in the masterly third canto of Childe Harold’s Pilgrimage:

There was a sound of revelry by night,
And Belgium’s capital had gathered then
Her Beauty and her Chivalry, and bright
The lamps shone o’er fair women and brave men;
A thousand hearts beat happily; and when
Music arose with its voluptuous swell,
Soft eyes looked love to eyes which spake again,
And all went merry as a marriage bell;
But hush! hark! a deep sound strikes like a rising knell!

Did ye not hear it?—No; ’twas but the wind,
Or the car rattling o’er the stony street;
On with the dance! let joy be unconfined;
No sleep till morn, when Youth and Pleasure meet
To chase the glowing Hours with flying feet.

Byron regarded Waterloo as a calamity for Europe, but he nevertheless galloped over the battlefield on a Cossack horse in May 1816, and we owe the expression ‘On with the dance’ – which Becky Sharp would have heartily agreed with – to him.

​Episode Four of the dramatization airs this coming Sunday and, judging by the dazzling recreation of the Vauxhall Pleasure Gardens in Episode One, the Duchess of Richmond’s  Ball  should be a treat.  I can hardly wait!

Beauty and Chivalry is available from Amazon here: