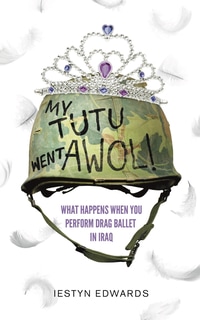 In 2005 I auditioned for Combined Services Entertainment for what I assumed would be recitals of light classics for officers' mess nights at the Hilton, Park Lane. What C.S.E. actually had in mind for me was touring my interactive drag ballerina around the outlying military bases of Iraq and Afghanistan – with the Royal Marines out in theatre, the camel spiders and the insurgents hopefully holding off on the respective maulings...

I had been sent to C.S.E. by Admiral Sir Alan West, First Sea Lord, who had invited me to sing on-board H.M.S. Victory at the naval supper marking the two hundredth anniversary of the Battle of Trafalgar, in the presence of Her Majesty…
​
More importantly: in the presence of Royal Marines Commando Stacks. Baby of face, blue of eye and rocky of outcrop, Stacks had been chosen for guard duty because he was the biggest, warriest marine to hand, that was also interested in the arts: his grandmother having been a church organist until the incident during Devotions. Lord West, sending me for my audition with C.S.E. said that if I ended up in Iraq, I might meet Stacks again, as he was often asked to liaise with the entertainment tours. His granny again.
I ended up on four tours to Iraq and Afghanistan, and on the very first our liaison was, yes: baby of face, blue of eye, rocky of outcrop. Stacks peered down at me as I stood jet lagged and terrified in the Basra A-pod and said, 'Of all the bases, in all the warzones, in all the world…'
​
And we were off. The most unlikely friendship was formed. True it was dented at the start after he asked me not to get him onstage for my act, his fellow marines pushed him onstage, I was lippy to him and he upended me and ran to the nearest tank to dump me on it.

'That, you lippy fucker, is that naughty tank. And you're not getting down off it till you sing me the song I particularly liked off Victory.'
While I was singing I had my first experience of rockets close to…

As Joanna Lumley has said, 'Iestyn is our eyes and ears out there. His stories are both hilarious and touching.'

And Miranda Hart, who knows a thing or two about fun, has given this lovely quote for the forthcoming audiobook:

"Only the divinely unique Iestyn Edwards could be in a tutu in a war zone and write about it so perfectly.  Moving, fascinating and completely hilarious - it’s got it all....as has the man himself."
​
Photo of Iestyn as Madame Galina by Luke Casey-Browne at The House of Black.